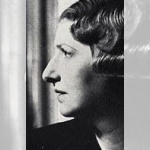 Rose Adler was born in a bourgeois family in Paris. Her engagement to Roger Leo Marx (son of a family of collectors and himself fascinated by the decorative arts) and the impromptu death of the latter surely oriented Adler’s artistic and political sympathies.  The motto of her spouse’s family : « Nothing, nothing without art. » invariably embodied the career of the bookbinder and decorator, trained at the École du Comité des Dames de l’Union Centrale des Arts Décoratifs (UCAD).

The success of the young Parisian was immediate and inalienable. At thirty, her bindings were already exposed and her name known among the professional groupings of artists, such as the Société des Artistes Décorateurs she became a member of in 1923.
Rose Adler formulated her artistic postulate in these terms : « The modern bookbinder is truly modern in that, that he his at the service of the text. He moulds it, exalts it. Nonetheless, he must refuse description, for description only being illustration. ».  Thoroughly seduced by this harmonious and innovative perspective, the couturier Jacques Doucet, designer Pierre Legrain, architect Pierre Chareau, poets Pierre André Benoit and René Char, soon became her dearest friends and supporters. With them, she extolled the elegance and modernity of her bindings, coupling inlays of semiprecious stones, fondue leather linings with couvrure skins and « edge to edge » liners. Her pluralistic innovations very obviously fueled the art deco movement before overstepping it in favor of the modernists whose codes matched further to her aesthetics.

In 1959, as she prepared herself to expose at the Société de la Reliure Originale (Bibliothèque Nationale), the ally and inseparable accomplice of the constantly renewed creation of the twenthieth century, died.