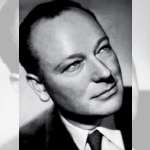 Jacques Adnet's architectural and design talent craddled the twentieth century. His numerous turnarounds never dented the excellency and the refinement of the precursor furniture he crafted.

L’Ecole des Arts décoratifs of Paris endowed him and his twin brother Jean of a remarkable training, which he skillfully distilled in an almost incursive control of the materials he tuned and shaped with thoughtfulness and taste. Aged nineteen only, he took part with Louis Süe and André Mare in the founding of the Compagnie des arts français which he would take the lead of in 1928. From the "serious, logical, friendly" sets,  based on fine craft traditions, he only maintained the seraphim crafts.
Jacques Adnet thus only teamed up with the most modern- Charlotte Perriand, René Gabriel, Dufy, Léger, Lurçat, Daurat, Georges Fouquet and Jean Besnard- declining under his label and through his administrative rigor, the inexhaustible crucible their style and polymorphous phraseology formed.

One not only remembers of Jacques Adnet’s work the close ties he weaved with eminent artists as Gilbert Poillerat and Giacommetti, but also the numerous honors he was given. The simplest achievements are symmetrical to far more wonderful successes- which it would be pointless to fully narrate here. In 1937, Jacques Adnet obtained the grand prix of architecture and furniture ensemble for the Glass Pavilion Saint-Gobain of the Universal Exhibition in Paris. Ten years later, he presided at the Salon des Artistes décorateurs and again ten years later, he designed a mansion for Frank Jay Gould,  a studio for the French president in Rambouillet, private apartments of President Vincent Auriol at the Palais de l’Elysée, the ship Ferdinand de Lesseps (1952) and UNESCO (1958). In 1958, he again won the grand prix of the Universal Exhibition in Brussels. At his death in 1984, Jacques Adnet had already presided the National School of Decorative Arts in Paris for 25 years.