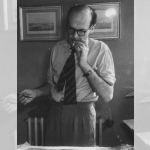 Félix Agostini was born in 1910 in Paris. This self-taught drawer and wanderer of the imagination raised his flag very high in the twentieth century landscape, by the abstract, stylized and surrealist seal of his lamps and sculptures.

Aged 24, he was hired as an illustrator by the printer Draeger, a position he thrived in and fulfilled beyond requests. Miscellaneous collaborations with Peugot, Ford, Ducretet, Thomson, Andrex and Chanel (printed fabrics) staked the path of his early career.  Agostini consecutively founded his own atelier where his first wrought iron, ceramics and bronzes model were imagined and undertaken and further predicated his attachment to the aesthetic of his day by designing an hommage piecework to Alberto and Diego Giacometti : « L’Echassier ». Only from 1955 did he start to sculpt with gypsum, the prototypes of his most renowned creations (thereafter cast in bronze). The latter, impregnated with the aerial and celestial fantasies of the artists, are enchantments peopled by marvelous birds and stars.

Felix Agostini disappeared on 19th February 1980, at the Clinique du Val d’Or in Saint-Cloud. His two-hundred pieces great work loses nothing to the evanescence of time but rather, improves itself gently.