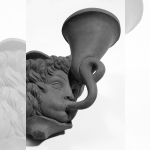 Vadim Androusov chiseled his taste for technique and materialization of the spirituality of men at his father’s and grandfather’s side, both geologists and archeologists (Schliemann). Further to a few peregrinations in Europe, Androusov definitively sets up his studio in Paris in 1920 and follows Bourdelle’s classes at « La Grande Chaumière ».

His first sculptures are dated 1925 and either represent feminine figures or characters inspired by Antiquity. Little use of bronze was made by Androusov, for his preferences rather leaned towards clay, plaster, wood or stone. He exhibited his accomplishments at the Salon des Tuileries and the Salon des Independants and led in parallel a prolific activity of decorato. Sconces, furniture handles, keyholes, in addition of Medusa heads or lions; the original creations of the artist adorn the most beautiful neoclassical works of Arbus and Pascaud.