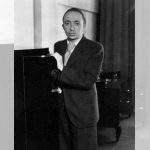 André Arbus was born in 1903 into a Toulouse cabinet-making family; he was trained very early in the profession, practiced for several generations in his close circle. During his youth, he studied law and art, and for a while he learned painting at the Ecole des Beaux-Arts in Toulouse before turning to furniture design for good.
In 1925, when he exhibited one of his creations for the first time in Paris, on the occasion of the International Exhibition of Decorative Arts; he collaborated with the painter Marc Saint-Saëns, which earned them a silver medal and marked the beginning of a long collaboration between the two men. In 1926, Arbus became a member of the Société des Artistes méridionaux, where he exhibited regularly. In 1930, Galerie L'Epoque opened its doors on rue La Boétie to present its furniture. Between 1932 and 1933, Arbus gradually moved to Paris where he finally opened offices for the sale of his creations, then a gallery on Avenue Matignon in 1935. The receipt of the Blumenthal Prize, also in 1935, was an official recognition.

The 1937 International Exhibition crowned its success and Arbus delivered furniture for no less than six pavilions. Arbus was then considered the most gifted and famous of the representatives of the great French tradition; he proposed to renew a whole section of furniture production by creating pieces with refined and elegant shapes borrowed from the 18th century as well as from neoclassicism.

During the war, he did not stop working as a decorator or architect; he delivered buildings as diverse as they were varied. After the conflict, with the support of the French government, which tried to revitalize and encourage national industries and crafts, Arbus received official and public commissions. He delivered furniture for the apartments of the Château de Rambouillet on several occasions and was entrusted with the design of the Planier lighthouse off Marseille.

A man of many talents, a master builder, sculptor and architect of genius, Arbus will embody the figure of a perfectionist and erudite decorator. His pieces are a reinterpretation of the great styles of a glorious artistic past, subtly adapted to modern tastes and needs.