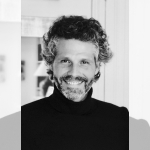 Nicolas Aubagnac was born in Paris in 1971. He graduated from the Olivier de Serres School in Paris, in interior architecture (Ecole Nationale Supérieure des Arts Appliqués et des Métiers d'Art). This training, which he followed alongside craftsmen, gave him a thorough knowledge of materials and know-how. In 1994, he won the Art and Construction competition launched by the Coprim contemporary art foundation. In 1995 he exhibited his first pieces at the Galerie du Haut Pavé (Paris 5), a gallery supported by artists such as Dufy Poliakoff or Pierre Soulages. In 2001 he exhibits at the via ("exposition design France - génération 2011") and obtains the VIA label. Nicolas Aubagnac created his own design office in 1997 with Delphine Read his associate. He immediately designed his first collections and quickly became known in the professional press. From exhibition to exhibition, his reputation was built up among great decorators, architects and collectors: in Paris, Maison et Objet trade fair, Alexandre Biaggi gallery, Palais des Congrès, Le Studio gallery, biennial exhibition of decoration editors, Joyce gallery, Pavillon des Arts et du design, AD collection, Chevalier gallery. Since 2017, two New York galleries have been presenting his work on a regular basis (Maison Gérard gallery and Twenty First Gallery). Nicolas Aubagnac is also solicited by noble French houses and institutions: Baccarat, Delisle, Pouenat, Galerie Chevalier, Ateliers Pinton, le Mobilier National. All of them are living heritage companies and defend the continuity and development of know-how in design. Recently, Nicolas Aubagnac celebrated 20 years of creation at gallery owner Pierre Alain Challier, with an exhibition of his creations staged alongside contemporary works of art.

Passionate about beautiful materials, he has surrounded himself for 20 years with the best French craftsmen to create his exceptional furniture. All his creations are made in France and entrusted to master craftsmen. He is part of the great tradition of French Decorative Arts. Today, Nicolas Aubagnac's talent is recognized both in France and abroad and his clients are mainly great international decorators and collectors in love with the art of living "à la française". Nicolas Aubagnac's creations are all stamped with a hallmark to identify them. This original stamp is made up of four "A's" assembled in a star shape (nicolas aubagnac). Influenced by architecture, Nicolas Aubagnac's style is marked by the constant search for the right proportions and the use of strong and precious materials: forged steel, gold leaf decoration, parchment, shagreen, straw marquetry, glass paste, bronze and rare woods. His furniture has become timeless thanks to the use of simple geometric shapes harmoniously combined. His elegant and contemporary creations exceed the fashions.

Nicolas Aubagnac represents the "Classicism of the future".