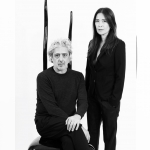 Ria and Yiouri Augousti thirty years ago, while both were still students, respectively at the London College of Furniture and at the Architecture Association in London. The encounter and the progressive sharing of their passions of the art and design bound them together.

They sought out sources of inspiration in their travels, encounting various cultures, art and architecture. whether a peacock in the gardens of a Nepalese princess, glassworks unearthed in a tiny Czech Republic shop or the Peggy Guggenheim in Venice, Ria and Yiouri Augousti undertook to converge cultural and historic paths and establish at the crossroads of the latter, a rare and beautiful aesthetic. The 1930’s are alway exquisitely evoked, and began to create "modern vintage" patterns that have become the R&Y Augousti signature.

In 1990, Ria and Yiouri Augousti set up their first exhibitions et created their very own label. Neiman Marcus, Barneys and Hôtel Crillon commissioned them with miscellaneous stationary and furniture. Initially installed in the 6th arrondissement in Paris, they moved to the 7th in 1997. In 2002, they inaugurated a line of handbags and small leather goods and in 2006, furthered their entreprise to the crafting of jewelry.