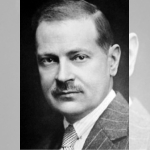 Being jointly fashion illustrator, decorator-designer, painter and protagonist of the Art Deco movement surely isn’t the apanage of all, especially when -as it was the case for Georges Barbier- the countless denominatives he is given only decline one true identity in the end: artist.

Born in Nantes in 1882, Georges Barbier abandoned the Armorican massif and his comrades, Lesage, Chantron, Broca to settle in Paris where he was trained in the studio of Jean-Paul Laurens at the Ecole des Beaux-Arts. By 1910, he already exhibited at the Salon des Humoristes under his pseudonym Edward William Larry and is noticed by Lucien Vogel, publisher, who introduced him to the circle of La Gazette du Bon Ton. Iribe, Lepape, Marty, Martin Boutet de Movel Brissaud and Brunelleschi became dear colleagues of his.

Georges Barbier never fluttered around. He was always driven by a forceful passion, his multidisciplinary approach taking no other ends than the everlastingly pushed limits of his envy to create. Thus, mere illustration of articles for journalists and prominent writers of the time (such as Colette, Marie Regainer aka Gerard d'Houville, Anna de Noailles, Albert Flament Francis de Miomandre) did not fulfill him. He therefore also exercised his talent in the sphere of fashion. Magazines (Femina, Vogue, Commedia) and artistic directors Paul Poiret, Paquin, Lanvin, Worth, Vionnet and Louis Cartier call upon him,  the latter making his Black Panther jewelry pattern famous.

One shall also remember that among his protean activities, Georges Barbier also lit up the theatre, poetry and cinema landscape of his day. Illustrations of works of Baudelaire, Theophile Gautier, Alfred de Musset, Paul Verlaine ( "Fêtes Galantes"); costumes devoted to the Folies Bergères and scenography for Maurice Rostand are only a few examples of the product of his fruitful collaborations.
George Barbier died in 1932 at the height of his success. The rich heritage of the artist was never fundamentally unveiled and his works still remains a legacy of which only the most refined collectors and bibliophiles know about.