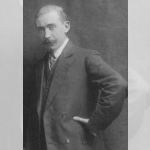 Louis Joseph Pierre Barillet is a French glass artist. After painting studies in the studio of the painter Jean-Léon Gérôme at the "Ecole des Beaux-Arts de Paris", Louis Barillet started his career as a medal carver - and painter, but on a more confidential scale. In 1919, he opened his glass artist studio in the 2nd district of Paris. He worked with Jacques Le Chevallier, and then Théodore-Gérard Hanssen. During the 1920's and the 1930's, they had both participated at the French rebirth of stained glass.

At the Modern Artists Union, a movement of artist decorators and architects created in France in 1929 by the architect Robert Mallet-Stevens, Louis Barillet showed his work.