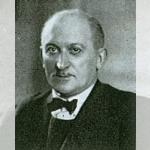 Georges Bastard was born in 1881 in Andeville, in a family of fan-makers, inlay and marquetry masters.
He left his hometown to study at the Paris Decorative Art School from 1896 to 1900, and came back as soon as he graduated. There, he worked in the family firm, creating fans, chessboards, boxes and jewels. At the same time, Bastard started his own carrer as an artist, sending frequently from 1902 his work to the Salon of the French Artists Society.Moving to the capital in 1908, success is immediate. He opened his own boutique and in 1911 exhibited the fan « Epi d’Orge », inlayed with nacre and  horn. Bought by the French state the following year, the fan can be see today at the Musée d’Orsay.
Expressing his creativity in Art Nouveau and Art Deco style, Bastard’s work was displayed at the Salon d’Automne, and the Tuilerie’s one, as much as at many international fairs. Emile Ruhlmann commissioned him to decorate some of his interiors. Virtuoso, Bastard’s work is remarkable by an elegant and clever use of precious materials, such as nacre, tortoiseshell or horn.
In 1935 he became head of the Limoge Decorative Art School, and then head of the Sèvres Manufacture in 1938. Georges Bastard’s carrer was suddenly stopped by his accidental death in 1939.