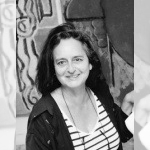 « I featured a look, my own memories, a weaving, the memory of a scent, a sound, the nobility of a body of ebony, the dignity of a face, the peppery taste of the south ».

Without knowing anything about the plastic vocabulary of the sculptors we have always presented at the gallery, whether it be Gustave Miklos, Joseph Csaky or Jean Lambert-Rucki, Kelli Bedrossian's sculpted work bears witness to a kind of stylistic filiation with theses emblematic sculptors.

Born in 1955, Kelli Bedrossian entered at the School of Applied Arts in Paris in textile at the age of 16. At 18 years old, she was admitted to the Beaux-Arts, in the studio of Mr. Crémonini and Mr. Amor. Thereafter, she shared a workshop at the Villa Corot, met the world of theatre and cinema and participated in the creation of many scenery. Then, she chose to devote herself to painting and sculpture.

Having lived all her childhood in the workshop of a great Ivorian painter, Coulibaly Ouezzin Clement, she became impregnated very early in African culture. If painting has imposed herself on it, its works are the expression of the artist’s varied influences, merging her attraction for Africa and Armenia. From these multiple influences results an architectural and frontal conception of her works, by the articulation of the masses in precise volumes and the prismatic juxtaposition of the plans.

The Marcilhac gallery represents Kelli Bedrossian for 15 years now. Two exhibitions were dedicated to the artist in the gallery, in 2012 and 2014, as well as being regularly exhibited at our shows in Paris, London and Geneva. A third exhibition is under preparation.