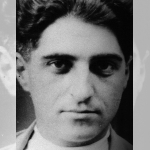 The plurivalent hungarian artist, Etienne Beöthy, smoothed down his mutilated century through his sculptures, paintings and photographs. He fortunately escaped the madness of the First World War and took advantage of that suspended time to develop in his sublime « Golden Series » a practical theory based on the Golden Ratio. This work found itself an immediate application in the « groupe du Surhommes », then  « Rythmes plastiques ».

His victory in the Fine Arts School competition of Budapest in 1924 allowed him to quickly jump the frontiers and enjoy the wonders of the multiple cities he visited : Vienna Munich, Nuremberg, Strasbourg, Genoa, Florence, Rome, London; Venice and Paris where he eventually settled permanently in 1925.
The field of aesthetic transfers carried out by Etienne Beöthy is only truly appraised through the analysis of the numerous networks he vowed and his membership to groups praising "concrete" abstraction in the heart of non-figurative art. As a matter of fact, he joined Seuphor and Torres-Garcia in the « Circle and Square » group; and founded with Herbin, Arp, Gleizes and abstract artists « Abstraction/ Creation ». After 1945, Herbin, Sonia Delaunay, Mondrian, Vantongerloo and other figureheads of "concrete art" created under the aegis of  Béöthy, the « Salon des Réalités Nouvelles ».

Each of Beöthy’s sculpture is full of duality. It belongs to modernity and progressive thoughts; but also to classicism through the obedience to universal and timeless basic order emanating from the works. Between geometric abstraction and lyrical abstraction, biomorphism and transposition of "nature's impressions," Etienne Beöthy imposed a standalone formal vocabulary imbued with profound humanism. As he pointed out, "Life is a disequilibrium always stretched towards equilibrium (...), art unites opposites. ".