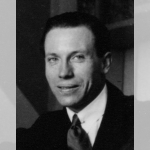 Trained between 1914 and 1922 at the modern Ecole spéciale d’Architecture, Georges Djo-Bourgeois put in practice his thoughts and set in motion his ambitions through the creation of furniture and interior design. As soon as 1922, he was already showing several of his pieces at the Salon d’Automne and Salon des Artistes Décorateurs where the latter gradually received more acknowledgement. At the Salon des Artistes Décorateurs in 1924, Mallet Stevens and Pierre Chareau noticed Bourgeois and invited him alongside other young artists (Francis Jourdain, Eileen Gray et Pierre Legrain) to decorate the mansion of Charles and Marie-Laure de Noailles in Hyères.

In conjonction to myriads of private orders (mansion in Saint-Clair for Pr. Lahy,…), Djo Bourgeois was also contracted by Atelier Stadium Louvres, and various other great department stores. Only in 1925 did he found his very own atelier rue Vanneau.

Advocating subjugation of the structure to the function and the usage of furniture, himself, René Herbst and Charlotte Perriand merged in 1928 in a minor avant-garde group. Duo Bourgeois took his last breath while the world was still marveling at his gleesome work.