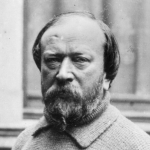 Italian designer, Carlo Bugatti distinguished himself by creating genuine sculptural objects which are immediately recognizable. Artist, industrial designer, decorator, architect and cabinetmaker who invented concepts as well as goldsmithery models, he left as his legacy a large and diverse production.

In Milan, his father - who was a wood and stone carver - taught him his first technical skills. In 1875, he entered the Brera Academy where his particular interest in architecture began. He then joined Mentasti’s workshop to learn traditional methods, which led him to finally open his own workshop in the 1880’s. In his search for the ideal form, he was inspired by architectural stylized ornaments from antiquity to Far East forms. His formal researches brought him success at the 1902 Turin Prima Esposizione d’Arte Decorativa Moderna with his famous ‘Snail Room’ which appears as the Bugatti style manifesto. He settled in Paris in 1904 and opened in the same year a workshop where he created artistic furniture and also silver and bronze pieces, allowing him to find an international clientele. In 1910, he retired and moved to Pierrefonds where he dedicated himself to painting. His two sons became two renown artists as well : Ettore as a car designer, Rembrandt as a sculptor.

The study of ornament had thus been a central concern for Bugatti throughout his career. His patterns draw their inspiration in the vegetable world, calligraphy and geometry, especially elementary shapes, like circles. He played with associations of unusual materials and techniques like wood painting, leather-covered wood, inlaid wood with brass, tin or mother-of-pearl, making this decorative system his signature. As an independent artist, Bugatti was fully aware that he had created a unique style.