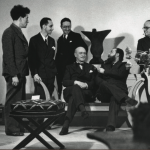 Adolphe Chanaux is a French cabinetmaker and decorator. He began by training as a cabinetmaker in André Groult's workshops. Very quickly, he took over one of his workshops at 7 rue Montauban in Paris, near a city designed for artists, called La Ruche, and became his own boss and later associated with Gilbert Pelletier. He then considered himself to be a "decorator of all kinds", as shown by the 1921 business directories. His passion for wood and mastery of his art made him known to Jacques-Émile Ruhlmann, Eyre de Lanux, Marcel Coard and Pierre Chareau for whom he made a large number of pieces of furniture.

The company received numerous orders, including the decoration of the Parisian apartment of the novelist and poet François Mauriac. But society is not immune to the economic crisis. It was in such difficulty that it went into receivership in October 1933. Two years later, Adolphe Chanaux and Jean-Michel Frank sought outside capital to create a new company: the Faubourg Saint-Honoré boutique. Charles de Noailles, Emilio Terry, Mrs Raoul Aaron, Elsa Schiaparelli, Arthur Spitzer, Frank's cousin and banker, who are their clients, joined their company. From this collaboration between Chanaux and Frank, several achievements will then emerge. They are in charge of setting up Elsa Schiaparelli's shop on Place Vendôme. For Jean-Pierre Guerlain, they were at the origin of the design and decoration of the apartment and the perfumery of Place Vendôme as well as its beauty salon on the Champs-Élysées. They also decorate the showroom of fashion designer Lucien Lelong.

Chanaux marks a turning point in the decorative art of the time, opting for a softening of the interiors. His work is minimalist, the chromatic circle widens and the reference to the old is more and more present. This "strange luxury of nothing" that characterizes their work makes them true precursors in terms of decoration. But in 1939, the two friends separated because of the war. Chanaux and most of the staff found themselves at the front. This was a fatal blow for the company, which went bankrupt and closed its doors permanently in 1942.