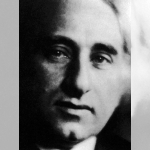 Born in Bordeaux in 1883, Pierre Chareau was one of the first modern French architects to use new materials such as glass and steel, but he was also a decorator, cabinetmaker, inventor and designer.

The British firm of Waring & Gillow hired him as a draughtsman from 1899 to 1914. Then, after the First World War, Pierre Chareau opened his own workshop in his residence on the rue Nollet in Paris (17th). His success at the Salon d'automne and the Salon des artistes décorateurs in 1922 enabled him to open a shop in the Montparnasse district called La Boutique.

Following the example of Le Corbusier and his friend Robert Mallet-Stevens, he applied the same precision of gesture to create unique pieces in precious wood, mass-produced furniture in steel tubing, and wall lamps in alabaster leaf. He created modular furniture for private clients as well as for film sets, notably for Marcel L'Herbier's films - L'Inhumaine (1924) and Le Vertige (1927) - for which he was chief decorator. For the 1925 International Exhibition of Modern Decorative and Industrial Arts, he created the office-library of the Pavillon d'Une Ambassade française, now reconstituted in the Musée des Arts décoratifs in Paris. In 1926, on the occasion of the 16th Salon des artistes décorateurs, he founded the « Groupe des cinq » composed of Pierre Legrain, Raymond Templier, Jean Puiforcat et Dominique. They deprecated the Société des Artistes Décorateurs because of their high praise of classicism. He was also called by Mallet-Stevens to decorate part of the Villa Noailles in Hyères.
Although his architectural work is more modest, mainly because he is self-taught in this discipline, it is just as remarkable. Indeed, after having designed the Club House of the Golf de Beauvallon at the request of Edmond Bernheim and the Villa Vent d'Aval (1927-1928), he created a genuine masterpiece for his friends the Dalsaces: the Maison de Verre (1928-1931).

Forced to flee France with his wife Dollie in 1940, Pierre Chareau settled in the United States where he ended his life, leaving behind his final work, the house-studio known as "Pièce-unique" for the painter Robert Motherwell.