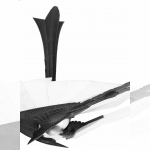 Albert Cheuret was a discreet personality. It would seem that he was trained in sculpture by the academic Georges Lemaire and Jacques Perrin, professor at the Beaux-Arts de Paris.

Cheuret began his activity in 1907, he invests his Parisian studio of the avenue Franco-Prusse from 1921, and regularly exhibited at the Salon des Artistes français from then. In 1925, at the occasion of the Exposition internationale des Arts décoratifs, he occupied the stand #33 which was on the Pont Alexandre III. His creations were a huge success and were partially reproduced in Le Luminaire et les Moyens d’éclairage nouveaux by Guillaume Janneau (1926).

Although he designed furniture – consoles, pedestal tables, etc. – and decorative objects – clocks, mirrors –, lightings remained the iconic production of Cheuret ; patinated bronze and alabaster proved to be his favourite materials. He knew how to take the aesthetically advantage of the contrast between the whiteness of the stone and the dark shades of the metal.
Cheuret favored exotic birds and flora as a source of his repertory, their sculptural aspect reflected the initial training of the decorator ; his compositions appeared to be a wise superposition of geometrical shapes and a stylized bestiary or naturalistic subjects, powerfully transcribed in the bronze.