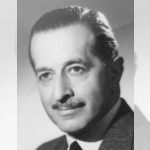 Great decorator of the 30s, Marcel Charles Coard is known for his participation in the layout of the appartment of the fashion designer Jacques Doucet, but also for the decoration of the castle of Paul Cocteau, next to Tours, realizing for one and the other furniture poles apart from each other.

Jean-Baptiste Charles Marcel Coard, born in a rich family of bankers and annuitants, was born on June 30, 1889 and, in spite of the reluctance of his father, joined the Ecole Nationale des Beaux Arts of Paris, in the section architecture, until World War I broke out. In 1913, he opened a "decorator - upholsterer" shop at 137 bis boulevard Haussmann, where he remained until 1926.

At first, he sells style furniture, advertising a "complete old and modern decoration". He only makes unique pieces in rare and precious materials for enlightened collectors like Jacques Doucet ; the ebony and nacre Macassar domes cabinets of the Musée des Arts Décoratifs in Paris are a good example. He is inspired by African, Oceanic and Cubist art to create his furniture, he himself owns a fine collection of objects from the Far East and realizes for his customers windows integrating collections of objets d'art. Arts from Africa or Asia. He works with renowned cabinetmakers like Chanaux and Pelletier, but also with Roumy, who creates for him works of rare complexity. When Jean Cocteau's brother asked him to decorate his house in Champgault, Coard began a work mixing a lot of style. There is simple and useful furniture in painted wood, but also sculptures of Csaky, bought in Rosenberg, mirror slats are integrated into the walls, an African dimension is felt on a bench and a limed oak table of "eventful" forms, and the table of the entrance hall, is nothing else than a large limed oak table, carved with an adze encrusted with a plate of black opaline.

The wealth of his creations and his adaptation to the desires of his customers make Coard a very sought-after artist in the 30s. The furniture that comes out of the houses of his cabinetmakers are usually hit with hot iron with his name followed by a parrot profile, trademark of this one. In the 40s, his style evolving, he integrates wrought iron, marble and a dimension "humanist" in his creations, recalling from time to time the work of Jean-Charles Moreux, but always for private customers.