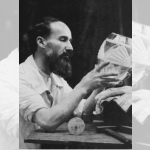 Aristide Colotte was born in Baccarat on 31 August 1885, when the city's economic activity was entirely centred around the crystal industry. His father, Jean-Michel, was a glassmaker at the time, and his paternal uncle, Jules Colotte, did the same. Thus, Aristide Colotte was to become a "glass sculptor" all his life. In 1901, he went to the factory as an apprentice tailor. A year later, he became an apprentice engraver and was definitively hired in 1902. After his military service, he returned to work at the Cristalleries, where people were actively preparing for the International Exposition of Eastern France. Then, without knowing the reasons, he left the factory voluntarily in 1909. When he visited the exhibition, he made a decisive meeting on the Baccarat stand: that of Eugène Corbin, patron of the Ecole de Nancy, who noticed Colotte's personality and talent. He therefore offered him the opportunity to create a crystal and metal engraving workshop in his establishment.

During the First World War, his activities were interrupted and he was assigned to the Châtellerault arms factory. He deepened his experience and perfected his previous knowledge as an engraver and goldsmith. Back in Nancy, he set up an engraving workshop on glass and metals. In 1924, he moved to a larger premises, which gave a new impetus to his work. It was then at the International Exhibition of Industrial and Modern Decorative Arts in 1925 that he presented his jewellery works, which won a bronze medal. His maturity is felt, orders come in.

From 1926, he exhibited his works, which was a consecration, particularly because he presented his first cut crystals, whose geometric shapes would become part of his entire work. In 1928, he innovated when he took the initiative to use crystal in raw blocks, like marble or stone blocks. He filed a patent on this subject.

During the Second World War, he supported Marshal Pétain and made him a crystal sword, which caused some enmity and forced him to flee to Germany. Returning to Nancy in 1945, he was incarcerated pending trial. Sentenced to four years' imprisonment, he finally left in 1947. But the National Committee of Artists' Purification forbids him to exhibit and sell for two years. Weakened, he then settled in a small village in Seine-et-Marne where he nevertheless tried to survive. Around 1950, he set up a small workshop and opened a store at 27, rue du Louvre in Paris. In 1953, he returned to the Société des Artistes français and exhibited at the 1957 Salon. But already seriously ill, he died on September 2, 1959 of leukaemia.