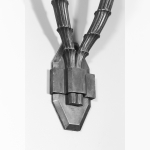 Décoration Intérieure Moderne, founded by René Joubert and Georges Mouveau in 1919, is a company that publishes and manufactures furniture and interiors. While Joubert is trained as an architect and has acquired some experience in decoration by working for Jansen for a few years, Mouveau comes from the theatre and brings his scenographic background to the association.
In 1923, Joubert found himself alone, working for a whole year, before meeting Philippe Petit (1885-1945), who arrived from Primavera. Throughout the years, Joubert kept an ascendant on Petit, drawing most of the furniture with vigorous lines, with reduced or even non-existent ornamentation, softened by Petit's carpets and wallpapers and his staging.

Joubert draws his inspiration from the Louis XVI and Restoration styles, somewhat reminiscent of the work of Leuleu or Follot. In addition to their series production in solid oak or walnut, Joubert and Petit also produce luxurious furniture, veneered with exotic woods, the "veining" of which they exploit, for an affluent clientele, in smaller pieces. In addition to furniture, D.I.M. also produces lighting fixtures, mirrors, fabrics, carpets and various art objects. At the 1925 Exhibition, D.I.M. took two shops at 37 and 39 on the Alexander III Bridge, their furnishings being completed by the work of Daum, Desagnat and Tisseyre. They also present a piano on the stand of the Pleyel house and the entire dining room of the French Embassy, which gives them immediate success.

Little by little D.I.M. became more modernist, Joubert introduced metal into his creations in 1927, which he presented at the Salon d'Automne and received an order for a New York café with only chairs and tables made of metal tubes. At the 1929 exhibition, the small modernist hairdresser they were exhibiting, extremely refined in crystal and metal, testified to their evolution and adaptation to the "fashion" of the time.

Joubert's death in 1931 and Petit's departure the same year did not put an end to D.I.M.'s activity, which now exhibits independently at the Salons alongside Petit, who died in 1945.