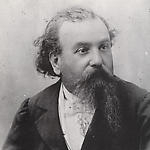 Pierre-Adrien Dalpayrat, was born in Limoges April 14, 1844, and died in his hometown  August 10, 1910. He is a French ceramist, one of the most important of the revival for European ceramics in the late nineteenth century.

In 1859, Dalpayrat attended the Drawing School and the Limoges painting on porcelain School. He worked in various potteries from all over France (Jules Vieillard and Cie in Bordeaux, Leon Sazerat in Limoges, Toulouse, Menton ...)

In 1889, he opened his own pottery in Bourg la Reine. In 1892, he signed a collaboration agreement with the sculptor Alphonse Voisin-Delacroix, providing mutual exclusivity for a period of twelve years. He had a great success at the Galerie Georges Petit. In 1893, he met the Swedish Agnes Frumerie with whom he will work for some time, but their differences will put a quick end to their collaboration.

That same year he participated in the World Exhibition in Chicago. Collaboration with Voisin-Delacroix stop because of his death of April 2 1893. He then joins Adele Lesbros until 1901, which provides financial support. Jean Coulon was also a collaborator from 1894. He enjoyed great success with its sandstone flamed stamped "Grenada". Despite this, his company knows financial difficulties, which requires direct production of more conventional items. He received a gold medal at the Universal Exhibition of 1900, and Legion of Honor. He becomes collaborator of two great goldsmiths, famous Parisian jewelers, Ernest Cardeilhac and Keller with whom he will produce remarkable pieces, mounted in gilded bronze. But the company, still experiencing difficulties, had to close in 1906. Pierre-Adrien retired to his hometown, where he died  on August 10, 1910.

It is the "red Dalpayrat" which made his international reputation with unique effects of ox blood red hue.

The pottery was taken over by Volant, then Genty under the banner of "Faïenceries of Bourg la Reine and Arcueil" with the participation of Albert and Adolphe Dalpayrat, two sons of Pierre-Adrien. You can still see at n°43, avenue du General Leclerc in Bourg-la-Reine, the big house in Normandy style architecture, decorated with earthenware, the property and family home. A engineered room became a museum, and presents since 2012 the "collection Dalpayrat"  with nearly 120 pieces.