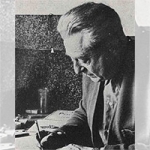 Jean Desprès was introduced to the profession of goldsmith at a very young age at the hard school of the old craftsmen of the Marais and followed drawing classes in the evening; he soon developed a keen taste for painting. The 1914 war took him; upon his release he abandoned all pictorial activity to devote himself to metal - silver, gold, tin, which he worked with a hammer. He oriented his research towards resolutely modern designs and exhibited for the first time at the Salon des Indépendants. Since 1928, he has exhibited at the Salons des Artistes Décorateurs, d'Automne, the Nationale des Beaux Arts and then the Tuileries, and has participated in all major exhibitions abroad.

He received a diploma of honour at the 1937 International Exhibition and a prize for Decorative Arts. He is also out of competition at the exhibitions of the Craft Industry as a creator-executing artist. He has always been actively involved in corporate issues: President of the Union since 1940, professional delegate for artistic protection, at the International Jewellery and Crafts Bureau, rapporteur for silverware at the Awards Committee of the Société d'Encouragement à l'Art et à l'Industrie. Jean Desprès was made a Knight of the Legion of Honour in 1938. Jean Desprès goldsmith, a craftsman passionate about his trade, loves to work with his hands and never repeats any piece. Professional obligations - customers and exhibitions in Paris - have never detached him from his Morvan where he draws, if not his inspiration, at least a taste for earthy and Burgundian - for the rustic vigour, the generous breadth of forms that characterize his silversmithing.

Jean Desprès has had, and continues to have, a very personal influence on the evolution of jewellery. His last assignment during the war - technical draftsman for aviation - played a decisive role in guiding his early research. Her jewellery is therefore the logical consequence of this experimental discovery. If it has gradually freed itself from this influence, it has remained faithful to the solid, pure forms, combining with the curves of the round form. He likes to contrast the colorations of white or red gold with the light matte of silver.