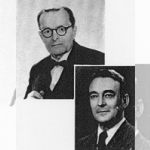 Maison Dominique was created in 1922 by two young decorators, André Domin and Marcel Genevrière. Dominique put up its repute through the creation of its proper aesthetic showing a slight cubist influence, a strong will to put aside past styles while keeping an elegant weft.

Throughout its history, Maison Dominique took part in numerous exhibitions, to start with the Salon d’automne of 1922. The success they acquired during this first exhibition allowed them to design the small salon of the private appartements of a French Embassy at the 1925 Decorative Arts Exhibition. In 1926, together with Jean Puiforcat, Pierre Chareau, Pierre Legrain and the jeweler Raymond Templier, Maison Dominique created the « Group of Five », designing furnitures and exhibiting as a group. In 1933, the duo is honored to be commissioned to design and furnish one of the four luxury suites of the Normandie cruise boat. After WW2, the French Republic commissioned furnitures for the Elysée Palace.

Once André Domin has left the firm in 1953, his son Alain stood as head of the company and kept it working until 1970.