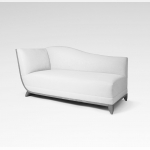 Following his student time at l’Ecole Boulle, Drouet worked as an apprentice to master designer Maurice Dufrene at Galeries Lafayette.  Thereafter he worked at DIM (Decoration Interieure Mobilier) and in 1929 joined the studio of Jean Domin. With a solid knowledge of quality, learned from his apprentice years, he had the ability to provide furniture and create a complete interior. Drouet was a true devotee of the art deco style, carrying it, albeit with French Forties flair, into the post-World War II era. Among his achievements was an apartment on the top floor of a mansion on Parc Monceau for Charles Boyer and Pat Paterson.