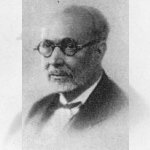 Born in a mountainous county of the Swiss Alps, Jean Dunand was a unique and manifold creator, at the same time sculptor, brass worker, goldsmith, lacquer and interior designer, driven by the resistance of metals as well as by the creative adornment he chiseled on them.

Jean Dunand was trained in the Ecole des Arts Industriels in Geneva, in the «Chasing and Modeling » section as well as in Jean Dampt’s atelier in Paris from 1903. He then married Marguerite Marie-Rose Antoinette Léonie Moutardier with whom he gave birth to their first child two years later. At that time, he had already permanently turned himself towards Decorative Arts and brassware.

It was on the occasion of a short journey to Italy in 1909 that Jean Dunand met a man who soon became his most precious henchman, Francesco Zambon, also known as Keco (Meilleur Ouvrier de France). In 1912, both supported each other in learning valuable skills as to work the lacquer, a technique he used masterfully on screens, panels, furniture, vases and portraits. If 1922 was the year of the French naturalization of Jean Dunand, 1924 was that of his foray into the fashion world. Jean-Philippe Worth, Jeanne Lanvin, Madeleine Vionnet, Charlotte Revil and milliner Agnès all called upon the originality of Dunand’s hand in which metal seemed to melt and transform with an ease hitherto unknown. In March 1926, he exhibited at the Union centrale des Arts décoratifs, and in May, at the Salon des Tuileries. He was also promoted to Officer of the Legion of Honour and swooned all Paris with four monumental vases decorating the courtyard of the Pavilion of Arts and Crafts at the Exhibition of Decorative Arts in 1925. Among the thousand two hundred works he conceived and designed, some remarkable pieces do stand out : four academicians swords, black lacquer panels for the liner Atlantic, five large panels on the themes of games, joy, sports, women and men. Moreover, Jean Dunand was nominated president of the "lacquer" section at the Exposition Universelle in Paris and in 1939 he decorated the French Pavilion at the international exhibition in New York.

Jean Dunand continuously declined his career and invariably enriched his creations. He was one of the few who succeeded in enslave the metal to emotion.