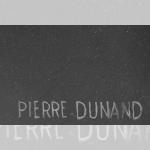 Third son of Jean Dunand, Pierre Dunand quickly abandoned a traditional and generalist school curriculum to join the family enterprise at the age of 17. At first attracted and fascinated by copperware, he then chose to dedicate himself to lacquer realizations, trained in those two domains by the craftsmen working in his father’s studios.

Showing huge ability and autonomy in the conception of independent pieces, Pierre Dunand yet devoted himself to the promotion of his father’s work, even after his death in 1942. Indeed, Pierre’s name only appeared sporadically and occasionally and until this date, the artist did not sign his personal creations, a fact that would not change a lot after the loss of the patriarch. Continuing to collaborate with the same decorators and cabinetmakers – as Jules Leleu, essentially for lacquer, and Eugène Printz for inlays and elements of copperware –, Pierre would never really drop the aesthetic instigated by his father ; the regular clients of the enterprise stayed very receptive to the « Dunand style », which was by some aspects an obstacle to the formal innovation in the studios. Nevertheless, Pierre Dunand was a virtuoso creator who was at the origin of numerous inventions and technical improvements which he did not hesitate to patent and to use in the production of furniture and objects as well as in the monumental realizations.
From 1942-1943, Pierre Dunand conceived the mural decoration of the bridge room of the ocean liner La Marseillaise, which lacquered panels represented a jungle – following the initial idea and drawings of Jean Dunand – with luxuriant animal and floral species covering a length of almost 10 meters. During those same 1940’s, he retouched several panels made by his gather for the Normandie, dismantled and then reinstalled in the Ile-de-France and the Liberté.

At the beginning of the 1950’s, the personal and autonomous creations of Pierre – including a series of abstract vases – being not as successful as expected, facing a general public with new tastes, he decided to quit the family enterprise in 1958 to turn to the realization of automotive caravans which he had began as an amateur a couple of years ago.