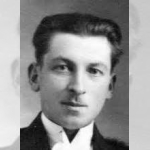 Jean Dupas is a French painter and designer. Student at the "Ecole des Beaux-Arts" of Bordeaux, he then gets into the "Ecole Nationale Supérieure des Beaux-Arts" of Paris in the studio of Gabriel Ferrier. In 1910, he won the Rome award and his very personal style was qualified of academic or neoclassical. After that, when the First World War was declared, he was requisitioned, but was liberated in 1919. In 1923-1924, he worked for orders from the "Manufacture de Sèvres", and for cartoons of the "Manufacture des Gobelins". In 1925, he sent Les Perruches to the French International Exhibition of Decorative Arts, a canvas which was very noticed. In 1927, he conceived the "Fourrures Max" catalog for the printer called Draeger.

Otherwise, he participated to the interior design of the "Saint-Esprit" church in Paris, keeping a predilection for monumental works. In parallel, he collaborated to the decoration of many liners as the "Île-de-France" and the "Liberté" with Alfred Janniot and Jacques-Emile Ruhlmann. For the decor of the Normandie large lounge, he had painted 400 square meters of glass painting. A lacquered panel had been executed by Jean Dunand on his own drawings. In 1939, he participated to the French Pavilion at the International Exhibition of New York. In 1940, he was appointed curator of the Marmottan museum, and then, became member of the "Académie des Beaux-Arts" in 1941.