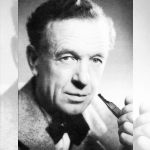 Born in Denmark in 1891, Christian Fjerdingstad received traditional training with a master goldsmith before opening his own workshop. His activity was quickly interrupted by the First World War, during which he joined the Foreign Legion. Wounded, he was demobilized in 1915 and decided to settle in France, in Fontenay aux Roses. There he met the painter Fernand Léger with whom he became friends. On the latter's advice, he exhibited his creations for the first time at the 1921 Salon d'Automne. He was very successful and managed to sell all his pieces, including a silver cup to collector Jacques Doucet.

It was at the 1925 International Exhibition of Modern Decorative and Industrial Arts that he was truly recognized when he won the Grand Jury Prize for a pair of candelabra. During this event, he exhibited both in the Danish pavilion and in the French pavilion, within the Christofle House, by which he was hired as creative director a year earlier. At the time the world's leading silversmith's house, Christofle ensured Fjerdingstad's stability and visibility. It also financed the installation of its workshop in Isle-Adam, north of Paris, where it participated in its operation in the early years and then simply selected a few parts of the production afterwards, until the end of their collaboration in 1941. Indeed, Fjerdingstad is also an independent artist and he develops several models marked with his own name in his workshop where he will employ up to ten workers.

Innovative, he developed a refined formal vocabulary inspired by the observation of nature on both silver and pewter pieces, to which he did not hesitate to combine other materials such as amber, coral, ivory, boxwood or rhinoceros horn. The complexity of his creations, their plasticity and finesse made Christian Fjerdingstad one of the architects of the revival of silversmithing at the beginning of the 20th century, alongside other great names such as Puiforcat, Jensen and Sandoz.