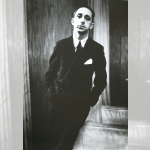 Jean-Michel Frank’s life and work bears the features of a romantic drama. The loss of his brothers and his father dragged the great student in a deep distress that kept on being for the rest of his life. He catalyzed his energy through the maturation of a « renunciation aesthetic" (in François Mauriac’s words). The systems outstretched in this aesthetic became not only unavoidable but also inimitable.

With the help of the cabinetmaker Adolphe Chanaux, Frank designed furnitures and lightings and using innovative materials such as gypsum, mica, graphite, shagreen, straw, and various shaping techniques such as sandblasted or ripped oak. Louis Aragon and Paul Eduard commissioned him several pieces. In 1926, whilst designing a smoking room and a boudoir for the Noailles Villa, Yves Saint Laurent named the rooms as the"eighth wonder of the world. »

From then, abundance of orders, wealth of achievements and intensity of relationships tinged the career of Jean-Michel Frank, appointed artistic director of the Chanaux & Cie. The pieces he created were produced in association with Alberto Giacometti, Paul Rodocanachi, Emilio Terry and Christian Bérard, who participated in Frank’s style giving it neoclassical, baroque or Napoleon III references. One shall note as well that the designers Lucien Lelong, Marcel Rochas and Elsa Schiaparelli all insisted Frank decorated their showroom.

The outbreak of World War II led to the closure of the Chanaux workshops and sealed the end of the life of Jean-Michel Frank. In devastated exile, he killed himself in 1941 in New York.