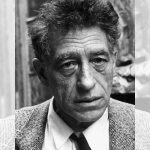 Arrived in January of 1922 in Paris to study the sculpture alongside Bourdelle, Alberto Giacometti, son of the neo-impressionist artist Giovanni Giacometti, is considered as one of the most famous figures of the French avant-garde of the 20th century. Rapidly introduced in the artistic and literary milieux of the capital, partly thanks to his first dealer Jeanne Bucher, he became part of the surrealists’ circle gathered around André Breton from the end of the 1920’s, before he became one of its real members from 1931 to 1935. Despite the short length of his adherence to the group, Giacometti’s work stayed marked by its precepts and principles his entire life.
The Second World War represents a turning point in the sculptor’s production ; the name Giacometti still and inexorably stays associated with the head-and-shoulder portraits and the standing or walking human figures, emaciated, extremely slender, as the artist modelled them after the conflict. The nervousness and the vibration of the sculpted surface, added up to an exaggerated elongation of the shapes are characteristic to this period of creation, crowned in 1962 by the receipt of the Grand Prix of sculpture of the Venice Biennale.

Sculptor of genius, Giacometti also showed his talent in the field of decorative arts, as he early modelled little objects of various shapes. Jean-Michel Frank was the first to detect the innovation potential of such an aesthetic applied to the movable creations ; from 1928, he commissioned his first objects to the sculptor – it is worth repeating that Giacometti was only exhibited for the first time by Jeanne Bucher the next year, in 1929. He realized more than 70 models for the decorator, and among them, almost 40 lightings.
The pieces for Frank reveal a mastering of the space and a stylistic purification – weather it manifest itself through geometrical of figurative shapes – which were rarely reached by the contemporaries of the artist ; they can be lightened to real independent works of art, more than simple daily objects.
The death of Frank, in 1941, cut short this fruitful collaboration and the creative momentum of Giacometti in the field of the furnishing production ; rare were, afterwards, the realizations of decorative art pieces.