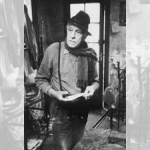 If the name of Diego Giacometti is tirelessly associated, in the writing as in the collective imagination, to the one of his famous brother Alberto, he remains a brilliant personality and one of the iconic figures of modern sculpture and furniture.

Joining Alberto in Paris in 1925, Diego studied for a time in Bourdelle’s studio at the Grande Chaumière as soon as he arrived. The sculpture does not seem to have been a vocation for the young man, who began to practice this art under the influence of his elder, from who he would stay very close his entire life ; indeed, the two brothers shared the same studio until Alberto’s death in 1966. First, Diego’s activity was essentially limited to helping his brother, in particular during the realization of the numerous pieces commissioned by Jean-Michel Frank ; Diego quickly revealed himself to be an indispensable practician in the creation process.

The Second World War marked a rupture in the momentum of the duo ; Alberto, held in Switzerland, could not come back in Paris until 1945. Diego, alone in the capital, then delivered his first independent creations, such as perfume bottles, which sales allowed him to subsist.
At the end of the conflict, the increasing role played by Diego in the work of his brother – realizing the basis and the structures of his sculptures – drove him to a creative emancipation, relayed by the strong interest of Marguerite and Aimé Maeght, as well as Pierre Matisse, Alberto’s art dealers, for his creations from the beginning of the 1950’s. The artistic personality of Diego was born ; he oriented himself toward the furniture conception, which he favored at the expense of autonomous sculpture. Rapidly, the Maeght commissioned pieces for their personal residences, and this visibility soon allowed the commission of the furnishing of an entire room in the Zurich restaurant of Gustave Zumsteg, « La Kronenhalle ».

The death of Alberto in 1966 only confirmed this rise of individualism ; Diego immersed himself in an imaginary and whimsical world, from which a prolific production of fabulous pieces was born, populated by a universe of characters, animals and vegetal elements modelled with ardour.
Subtil as well as universal, the art of Diego Giacometti is one of the anecdote and of the myth, invest with humour and irony. Each piece conceived by the sculptor was conceived for a person in particular, elaborated depending on its recipient ; it would often be modified, reedited, enlarged of shrunk for an ulterior commission. Inspired by the geometrical purification of the pharaonic furniture of the Ancient Egypt – discovered during a trip in the country in 1927 – as well as the one of the Greeks and the Romans, Diego dedicated himself until the end to the realization of purified pieces of furniture, with simple frame and visible architecture, witnessing an inventive genius and a aesthetic sens without limit.