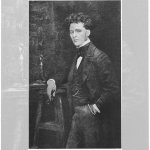 Gustav Gurschner is a sculptor born in Bavaria. He studied at the Academy of Fine Arts Vienna under the direction of August Kühne and Otto König. He then stays in Munich and Paris.

In 1898, he participated in the inaugural exhibition of the Viennese Secession and, in Paris, at the Salon of the National Society of Fine Arts.

From 1904 to 1908, he was part of the group of Austrian artists from Hagenbund. The Hagenbund is an artists' association based in Vienna and is one of the most avant-garde groups of visual artists in Austria until 1938.

Like Alexandre Charpentier and Jean Dampt in France, Gustav Gurschner is part of a general context of renewal of the decorative arts. He focuses on creating objects in everyday use: ashtrays, door handles, inkwells or electric lamps, frequently using expressive resources of the female body.

In the early 20th century, his work was imported into the galleries of New York City as he was considered a prominent Viennese artist. Its very elegant graphics bear the mark of a double cultural belonging. We find the sinuous lines of French art nouveau which are then tempered by the rigor and the taste of more Germanic symmetry.