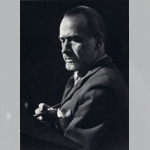 Henri Clément Serveau, is a French painter, draftsman, engraver and illustrator. Clément-Serveau produced works very early on in a realistic way, but soon became interested in new movements. He was influenced by his friend Louis Marcoussis and experimented with cubism, using geometric patterns to give the illusion of form and space. Later in his career, he turned to abstraction with a post-cubist stance. He designs banknotes for the Banque de France, creates large murals and participates in many French and international exhibitions. Clément-Serveau studied successively from 1904 to 1914 at the École nationale supérieure des arts décoratifs and the École nationale supérieure des beaux-arts under the direction of Luc-Olivier Merson in Paris. He began to exhibit at the Salon des Indépendants in 1905, then participated in the Salons des Artistes Français, the Salon d'Automne and the Salon des Tuileries.

In 1919, he becomes artistic director of Ferenczi & fils (Le Livre moderne illustré), where he illustrates many books (seventy-eight) using the technique of woodcutting. Colette was its literary director for several years. He also participated in thirty other books and received various medals for his work: medal of honor in 1920, bronze in 1921, silver in 1926 and gold at the Salon des Artistes Français in 1929. Thanks to his mentor Luc-Olivier Merson, he was able to design banknotes for the Bank of France. From 1956 to 1970, he designed forty-two French and foreign postage stamps. Clément-Serveau died in Paris on July 8, 1972. A room in the municipal museum of Bourbonne-les-Bains is dedicated to him.