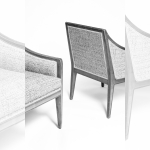 in Paris but did not attend any art school. With no training other than a general and refined sense of culture, he opened his own workshop at the age of 16 and began sculpting wood and making his own furniture. In 1899, he became director of the Art Nouveau workshop of the collector Siegfried Bing, for his shop called Art Nouveau in Paris. He remained there until 1901, supervising the production of the shop as well as Bing's installation at the 1900 Paris World's Fair. Jallot then participated in the creation of some of the most prized works of the Art Nouveau movement, those designed by the firm's famous trio: Georges de Feure, Eduoard Colonna and Eugène Gaillard.

In 1901, Jallot became one of the founding members of the first Salon de la Société des Artistes Décorateurs. In 1903, he set up his own decoration workshop where he designed and manufactured furniture, fabrics, carpets, tapestries, glassware, lacquer and folding screens.

Jallot was the first of the Art Nouveau designers to turn away from floral ornamentation and pursue linearism. From 1904 onwards, his decoration was limited to the natural grain of the wood. Moreover, he was in favour of rich materials rather than forms too elaborate to suggest luxury.

Jallot's works were exhibited at the Salons de la Société Nationale des Beaux-Arts in 1908, at the Salon d'Automne in 1919, and at SAD throughout the year.

He also designed furniture for the Grand Salon of the French Embassy and the Hôtel du Collectionneur at the 1925 Paris International Exhibition of Modern Decorative and Industrial Arts.

From 1921, Léon Jallot joined forces with his son, Maurice, and together they designed a wide variety of furniture and furnishings with simple lines and surfaces that were lacquered, painted or covered in leather or shagreen. In the 1920s, the Jallot family began to incorporate synthetic materials and metal into their pieces.

Léon Jallot was also a master of carved wood and lacquer. His long mastery of both mediums has been cited, and emphasis has been placed on the preserving effect of lacquer on untreated wood. Decorative panels and screens were carved in bas-relief with a variety of themes which were then defined in polychrome lacquers on a gilded background. They were produced until the mid-1930s.

Léon Jallot retired in the 1940s and died in 1967. Maurice Jallot continued the family business until the 1950s.