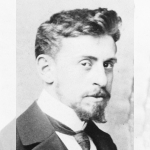 Paul Jouve, who is considered as one of the most famous animal painters of the first half of the 20th century, is also an iconic figure of the Art Deco period.

Born in 1878 in Malotte, near Fontainebleau, he was taught the basics of drawing and painting by his father, Auguste Jouve, who was himself a landscape painter and a portraitist. The regular exhibitions of Pau Jouve’s works at the Salon des Artistes français from 1894, followed soon by noticed participations at the Universal Exhibition of 1900, the Salon National des Beaux-Arts in 1905 and finally at the Salon des Artistes Orientalistes in 1906, contributed to the artist’s recognition among his pears and critics. From the 1910’s, he was considered as the leading personality of the new animal painting.

The diverse prices and scholarships obtained by Jouve during his career, mixed with a strong and natural appetence for travels, were at the origin of numerous expeditions realized by the painter all around the world, in Algeria, Egypt, Turkey, or the USA ; he was also the first pensionary appointed to join the Villa Abd-el-Tif. Those sojourns, real « laboratories », allowed Paul Jouve to face new horizons, exotics ones, with their wild animals which he loved to reproduce on the paper, the canvas or in the bronze.
The Far East journey made by the painter in 1922-1923 is particularly representative of his personality : winner of the scholarship offered by the general government of Indochina, he travelled through Cambodia, Vietnam, China and Ceylon, which landscapes and wildlife inspired Jouve for many drawings, engravings and paintings, such as Two Elephants Side Face, Kandy (1923).

The very singular and proper style of Jouve appeared since then : a purified and elegant aesthetic leading his compositions with a subtil chromaticism, while his incisive stroke echoes the graphism of Art Deco. His creations proposed a new apprehension of artistic animal representation ; Jouve described with acuity the psychological state of his subjects, paying attention to the attitudes, the expressions, and nearly humanizing them.
From the 1920’s, works of the artistic maturity showed a simplified stroke and a general appeasing of the palette, going with a pacification of the attitudes of the animals, different from the previous aggressivity and violence often enhanced by the painter until then.
Paul Jouve was invited to collaborate to the decoration of the prestigious ocean liner the Normandie in 1935 and was, at this occasion, commissioned two paintings for the first classes’ lounge, Elephant in Hue and Tigers drinking, soon reproduced and promoted by the lithograph medium in 1937.

Paul Jouve knew fame and glory during his life, partially thanks to the vibrant illustrations he made for several books, such as the famous Jungle book by Rudyard Kipling (1919) ; his talent was never denied and his works are today hung up on the picture rails of the greatest French and international museums.