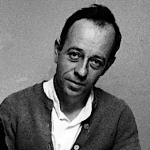 François-Xavier Lalanne was born in 1927 in an Agen setting that shaped the fundamental principles of his art. A grandfather who imported cow bones and was an art lover who himself reproduced masterpieces displayed in museums, a father who was a car enthusiast and president of the Agen Automobile Club, and his future animals, bred on the altar of art, were already taking shape before our eyes.

Enrolled at the Evreux Jesuit school in Normandy, François-Xavier acquired a good education learning Ancient Greek and Latin. In 1945, eager to learn drawing and painting, he moved to Paris and entered the Académie Julian where he attended Marcel Gimond's sculpture classe - who had been Maillol's student and a friend of Rodin's. Although he won the Académie's painting prize in 1948 and thus initially considered himself a painter, he had already integrated the concept of monumental sculpture. In 1949, he worked at the Louvre Museum as a guard and contemplated the works in the Egyptian and Assyrian departments, which he then took as his model. In the same year, he moved to a studio in the impasse Ronsin and joined the artistic tradition of conceptual art, the surrealists and the new realism among Redon and Noguchi, Niki de Saint-Phalle and Jean Tinguely, Max Ernst and Constantin Brancusi or even Marcel Duchamp. In 1953, at his first exhibition which took place at the Galerie Cimaise, he met the woman who was to become his alter-ego, Claude Dupeux, and who joined him in his studio in the Montparnasse area. Through their contact with James Metcalf, the Lalannes learned the art of galvanoplasty, a process that would stimulate their curiosity as sculptors.

Surrounded by art dealers and collectors, the Lalannes created a buzz in Paris. In 1964, Jeanine Goldschmidt, art critic Pierre Restany's wife, enabled them to throw their first exhibition entitled Zoophites at the Galerie J. François-Xavier's Rhinocrétaire is his artistic manifesto: this brass sheet metal rhinoceros-shaped behemoth turns out to be a desk and hides, in the manner of 18th-century secret furniture, a lamp, a wine cellar and a safe. Two years later, he produced another emblematic work: the Mouton, which embodies the artist's irony and innovation, since while criticizing the bourgeoisie, he offers them a comfortable piece of furniture that remains a work of art. He thus taught the greatest collectors who acquired it, such as the Rothschilds, Agnelli and Peter Marino, "the art of becoming a shepherd in a flat". A flock was then exhibited in Alexandre Iolas' gallery, giving the Lalannes' career a real boost. For François-Xavier, sculpture must be familiar and useful, while at the same time freeing art from its formal and serious straitjacket; we lie down, we sit, we eat, we write, we tidy up...

In 1967, the Lalannes settled in Ury, a place that became the epicentre of their creation for more than fifty years and revealed their real connivance. Their home-studio was the privileged place for dinners where artists such as Warhol met haute-couture designers such as Karl Lagerfeld or Lanvin, members of high society such as the Rothschilds or the David-Weills, and even aristocrats from the Greek royal family or the Bourbons. It was during these meetings in Ury that their complicity with Yves Saint-Laurent and Pierre Bergé was born. The couple placed many of the Lalannes' works in their flat on the Rue de Babylone, such as François-Xavier's nickel silver brass YSL bar, made in 1965 and sold at Christie's in 2009. Pierre Bergé declared about the Lalannes that it was preferable to replace the idea of "artist(s)" by that of "poet(s)". With this concept he revealed the particularity of an artist-craftsman who develops with lightness and fantasy a whole bestiary populating our uninhabited universes with humour.