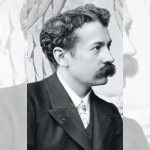 Before 1892 René Lalique worked as a designer for a jeweller on rue de la Paix, then moved to rue Thérèse and made jewellery under his name. He reveals himself at the Salon des Artistes Français of 1895 and then goes to the annual shows. In 1904, he was the sole architect of his house on Cours La Reine. Around the same time, Coty asked him for labels for his perfumes. During the war he made laboratory glassware for the Pasteur Institute. In 1918-19, he built a new and very modern factory in Alsace. From then on, Lalique is nothing more than a master glassmaker and he introduces glass into architecture.

In 1930, he helped organize a retrospective exhibition of his work at the Pavillon de Marsan. René Lalique, Grand Officer of the Legion of Honour, died in Paris on 1 May 1945.

His work and its repercussions inform us about the course of his activities. There is no doubt that he had acquired a great culture, a knowledge of the arts of all countries and of all times, but his material memory never appears in his personal and daring conceptions. He was, perhaps unconsciously, influenced by the literature and art of his time.