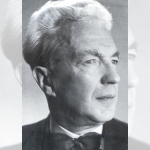 Jules-Emile Leleu was born in 1883 in Boulogne-sur-Mer, from a dressmaker and a father who was an entrepreneur in house painting and soon initiated him to his job. After studying in the Ecole d’arts appliqués Saint Gildas of Bruxelles, Jules Leleu entered the Ecole des Beaux-Arts of his native city, where he received drawing and sculpture lessons, which would provide him an intimate knowledge of the materials he would use for his furniture in the future.

In 1910, Jules and his brother Marcel became the head of the family enterprise. However, they only started making their own furniture after the First World War – essentially copies of old pieces ; in 1920, indeed, they opened their first workshop in Boulogne.
In 1922, Leleu brothers entered the Parisien scene by exhibiting for the very first time at the Salon de la Société des Artistes français ; they showed a cabinet praised by critics and reproduced in Art et Décoration. The same year, they exhibited a dining room suite at the Salon d’Automne. The Leleu firm chose to turn to a new direction : they abandoned the simple satisfaction of a bourgeois and local clientele to focus on the realization of luxury sets for the wealthy elite and the innovation by only creating modern furniture. At the same period, in 1923, the French state bought a chest of drawers, an armchair and a little table.
In 1924, Jules Leleu settled down in Paris where he now dreamt of establish his activities. He was then considered as the principal emulator of Ruhlmann.  The Exposition international des arts décoratifs of 1925 was the occasion, for Leleu brothers, to deploy their creations through numerous sections and pavilions ; they showed sets and pieces at the Ambassade française, in the class 8 (furniture) or at the stand of the Selmersheim gallery where a buffet got him a Grand Prix.

At the end of the 1920’s, Jules Leleu acquired the interior designer status (as opposed to the one he had until then : cabinetmaker). His first great realization was the interior of the appartements of businessman Michaël Winburn, from 1927 to 1928, in a purified and rather modernist style. Prestigious commissions then flowed : the renovation of the Parisian head office of the Compagnie des Lampes was exemplary.

The creations of the 1930’s tend to be characterized by constant simple shapes, by pieces without ornementation and by the appearance of discreet metallic elements on the  furniture – bases, locks, handles and table legs. At this same period, Jules Leleu involved his daughter Paule in the company, making her the head of the textile department while his son André was in charge of supervising sites.
The Leleu firm was commissioned the realization of numerous luxury interiors, of state and ministry sets, private apartments for the Japanese emperor or even the private pool of the comte de Rivaud, to name but a few.

From a local initiative, the Leleu house finally became a real dynasty who knew how to adapt to his plural and prestigious clientele’s needs. Despite the upheavals bred by the Second World War, its activity continued until 1973. From the 1940’s, André and Paule Leleu had become the head of the firm, but it would remain a family enterprise until the end, with both singular style and strong identity.