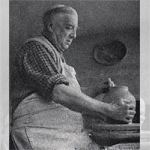 Emile Lenoble, born in Paris in 1875, studied at the Jean-Baptiste Say School. At the age of 18, he entered the Ecole Nationale Supérieure des Arts Décoratifs and then worked. The Lenoble family lived in Choisy-le-Roi where Ernest Chaplet, the renovator of contemporary ceramics, had set up his workshops. The old master taught him how to spin and introduced him to the secrets of the trade: Emile Lenoble's vocation was thus established.

In 1905, he married Chaplet's daughter, shared his workshop and presented his first works, in 1906, at the Georges Petit Gallery next to those of his father-in-law. The beginnings are difficult until the day when Salomon Reinachlui orders a table service for his villa in Beaulieu, built by Pontremoli, where everything was in Greek style.

From this time, many researches of materials date back to this period. A founding member of the salons des Artistes Décorateurs, d'Automne and the Tuileries where he regularly exhibits, Emile Lenoble participates in all the major exhibitions in France and abroad.

When Brittany, where he had taken refuge from them, was invaded by the Germans, he could not stand the ordeal and died in Crozon on August 14th 1940. Emile Lenoble had been a Knight of the Legion of Honour since 1925.