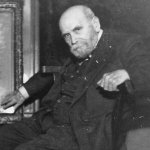 Born in Algiers on September 30, 1865, Lucien Lévy moved to Paris at the end of the 1870s. At the age of fourteen, he entered the École communale supérieure de dessin et de sculpture of the XIth arrondissement where he followed the Vion and Wallet courses. He began his career as a lithographer and then as a ceramist at the manufacture of earthenware Clément Massier in Golfe Juan which he soon becomes the artistic director. In parallel, he continues the practice of oil painting and pastel.

Returning to Paris in 1895, he became friends with the poet Georges Rodenbach who introduced him into the literary and artistic circles of the capital. Through him, he organizes a monographic exhibition at the Georges Petit gallery during which he officially takes the name of Lévy-Dhurmer. This event allows him to acquire a certain notoriety with the public and to attract the sympathy of several artists such as Emile Bernard or Gustave Moreau.

Two years later, he undertook great trips to Europe and the Middle East. These will inspire scenes and idealized landscapes that will lead to several solo exhibitions. That's why as he moves towards the Mediterranean region, his works tend towards a pointillism and a pallet with lightened tones.