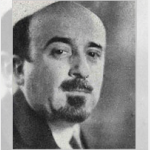 Claudius Linossier began working metal when he was young: First, in a goldsmith religious house in Lyon, in two Parisian workshops, and then for the Master Dinandier Jean Dunand. In order to work alone, Linossier left Paris and returned to Lyon. He settled in the Croix Rousse, obtained Florence Blumenthal price and later a price at the International Exhibition of 1937. On this hill, lived for centuries an art worker population, and he inherited the virtues of good craftsman loving technical perfection. Forms invented by Linossier are simple : round vases, bowls, dishes; never any ornament will disturb the purity of the curves. Paternes itself is designed according to the format which highlights the essential rhythms. Linossier never use enamels or lacquers. His works consist of inlaid metal with acid patina, but as it was too unstable, he definitely adopted oxidation torch. The body parts, red copper or iron-nickel with black tones, is lit, as appropriate, by the gray shaded silver, pale gold of brass or dark purple red copper.

Although he always remained in Lyon, Linossier regularly participated in exhibitions of the Société Nationale des Beaux-Arts, the Society of Artists Decorators and Autumn, when his wife Hélène Linossier, painter exhibited in the same time. Linossier was part of the group "Contemporary French Artisans" with Decoeur, Lenoble, Decorchemont, Daurat ... whose Rouard Gallery, continued to present when the cycle of exhibitions was interrupted.

A year before he died, having lost his wife and unable to get back to work or to overcome his pain, he founded in June 23, 1953 the scholarship Hélène Linossier intended to create three annual awards for students in Lyon School of Fine Arts. He was Knight of the Legion of Honour.