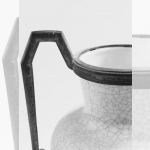 Camille Louis Lourioux, known as Louis Lourioux, was born in 1874 in the Berry region. At the age of 25, he shared with his father the management of the Legros, Buchon & Lourioux porcelain factory in Foëcy and was introduced in 1904 to the Chambre syndicale de la céramique et de la verrerie. The quality of the crockery produced was quickly recognised and led to an increase in demand in France and abroad. Thus in 1911 he received an order for ear dishes on their way to the United States in the holds of the Titanic.

Louis Lourioux also set up a research studio within his factory where he developed a more artistic production. Assisted by his foreman and friend Aristide Pipet, porcelain painter, chiseler Joe Descomps, and sculptor Charles Lemanceau, he offers limited edition pieces that will make his reputation. Its production began in the midst of the Art Nouveau period and then moved towards an Art Deco style, more refined and geometric. In 1906, he received the title of Officer of the Academy as an art ceramist and then opened an address in rue du Paradis in Paris called "Au Faune". At that time, he signed with the workshop of La Maîtrise des Galeries Lafayette where he worked under the direction of Maurice Dufrène. Contemporary of Emile Gallé and René Lalique, he was soon noticed for the quality and softness of his enamels.

In 1921, Louis Lourioux was the winner of the VIth competition organized by the Société d'encouragement à l'art et à l'industrie for decorators participating in the Salon d'Automne. At the 1925 International Exhibition of Decorative Arts, his Soir de fêtere vase received critical acclaim.