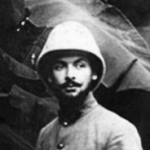 Student of the painter Andre DEVAMBEZ in the Fine Art School of Paris in 1917. Mobilized for the First World War, he is sent to French Indochina in Vietnam. He became a school teacher for arts in the College of Saigon. When he was in Vietnam, he travelled in Cambodia and did a lot of drawings of the Angkor site which will be used for the great Colonial Exhibition of 1931 in Paris. Back in France, he travelled a lot in Italy, especially Venice, and Spain. Between 1938 and 1945, he travelled in Egypt, India, Ceylon and Africa. From 1948 to 1955 he worked again as an art teacher in Saigon at the School of Architecture. He produced a lot of orientalist drawings on Vietnam, Laos and Cambodia, in the art-deco style, very modern, pure and stylized. He is famous for his charcoal drawings, water-colors and gouaches, and also his inks and sepias.