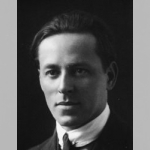 Gustave Miklos, born on 30 June 1888 in Budapest, came from a modest family. Very early on, he developed a talent for drawing. In 1904, he enrolled at the Royal School of Decorative Arts. The teaching is more technical than at the School of Fine Arts, and he meets Joseph Csaky, who becomes his friend. Between 1904 and 1906, he completed his education at the Munich Academy in the field of painting. Then in 1909, following in the footsteps of his friend Csaky, he decided to move to Paris and was accommodated by the latter in La Ruche, an artist's residence. As soon as he arrived, he attended the Ecole Spéciale d'Architecture without being enrolled. Eager to learn about the new school of cubism, he attended the Academy of La Palette, where he studied under the painter Henri Le Fauconnier, and later attended the Jean Metzinger studio.

At the Salon d'Automne of 1910, he exhibited his works for the very first time, and in his study notebooks of 1911, his drawings became more and more cubist. When the First World War was declared, he pursued his destiny in North Africa, Greece and Macedonia, which would have a decisive influence on his work. Back in Paris in 1919, he painted, drew and then sculpted the elegant and hieratic female figures that so strongly marked his style. The enamels he produced in 1921 were marked as much by Byzantine as by Cubist influences. Miklos' attraction for enamel, gold, silver and turquoise undoubtedly finds its source during these five years of peregrinations due to the war.

In 1919, he returned to his devastated Parisian workshop. However, he started painting again, made many encounters and savoured the taste of life. He gradually moved from painting to illustration and decoration, and finally to sculpture; he was introduced to the technique of lacquer with the craftsman André Brugier, and through this he met Jean Dunand, an emeritus coppersmith and lacquerer. In 1920, he suggested to the painter Pierre Frémond, who had started a workshop and trade in devotional objects, to bring the art of enamelling up to date, while making the drawings himself. His first enamels on silver plate were exhibited in 1923 at the gallery L'Effort moderne, run by the merchant Léonce Rosenberg. At the same time, he collaborated with the engraver F.-L. Schmied in the creation of bindings. In 1921, he is spotted at the Salon des Indépendants by Jacques Doucet, who asks him to work for him as Pierre Legrain's assistant. He first started with carpet projects, then made objects. Working for Doucet relieved the artist of the need and he was able to use some of his time and money to devote himself to sculpture, particularly in lost wax cast bronze. In 1923, Léonce Rosenberg devoted a personal exhibition to Miklos, recounting the work he had been doing since 1920, which was in line with Cubism. His decorative vocabulary is a clever blend of Viennese art, cubism, geometric abstraction and Byzantine art, all of which form the basis of the Art Deco style.

He notably participated in the creation of the "A French Embassy" pavilion at the International Exhibition of Industrial and Modern Decorative Arts in 1925. In 1928, he was exhibited at the gallery La Renaissance, rue Royale in Paris. He was still a member of the Union des Artistes Modernes, of which he participated in the creation. He will then be present at all the exhibitions of the Union. Beside that, he made a clientele of private amateurs who allow him to live easily. From 1935 onwards, his production turned towards more monumental and allegorical works and in 1937 he took part in the International Exhibition of Decorative Arts. In 1940, after the declaration of war, he was requisitioned as an assistant professor to teach art drawing in Oyonnax, a small town in the Jura and remained there until his death on 5 March 1967.