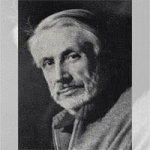 Henri Navarre was born in Paris on April 4, 1885. Woodcarver in 1902, at the Bernard Palissy School, chiseler, goldsmith, art worker, in 1905, he is received at the National Superior School of Fine Arts from which he deviates to seek technical education at the Conservatoire des Arts et Métiers (Lucien Magne workshop). There he studied stained glass and mosaics. From 1906 to 1911, he practiced stone cutting on building facades, model of large terracotta figures.

In 1924, he created the sculptures and stained-glass windows of "l'Intransigeant" and in 1938 a large vase for the French Pavilion at the New York Exhibition.

Henri Navarre is a member of the Salon d'Automne and of the Société des Artistes Décorateurs of which he is vice-president, is a member of the Jury of the École Supérieure Nationale des Beaux-Arts and of the Rome competition of the Conseil Supérieur de l'Enseignement des Beaux-Arts. He has been an Officer of the Legion of Honour since 1947. Goldsmith, glassmaker, medal engraver and sculptor Henri Navarre is a complete artist.

He creates his glass sculptures, not cut but stamped, like ceramics in the mould. By playing with all the effects created by the fluid, living material, he obtains shiny areas, shards of transparency or a rough matt finish which make each of his masks, his torsos and in particular the great Christ of the Ile de France a work in which the paste of the glass and the fire collaborate intimately with the creative will of the artist.