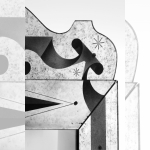 After studying at the Arts et Métiers, he was hired by master glassmaker Schwartz; upon his death, Pansart took over the management of the workshop. Serge Roche was already a customer at Schwartz but Pansart is expanding its network and working with decorators such as Jean Pascaud or Marc Plantier and with master metalworkers such as Gilbert Poillerat, Raymond Subes or René Drouet.

He was active during the 1930s, 1940s and 1950s and produced, among other things, glass-engraved decorations for the liner France. In addition to their sandblasting, the ice panels receive various colours, patinas and oxidation, silvering and gold leaf in the Pansart workshop. In the 1950s Pansart made mirror-sheathed furniture for King Farouk.

While it is mainly known for its mirrors decorated with arabesque figures and decorations, Pansart has also created a number of pieces of furniture with rather fantastic baroque shapes, reminiscent of the world of fairy tales, in a taste typical of the 1940s and 1950s. His mirrors often appear in the art and antiques market and are collector's items. Along with Pierre Lardin and Max Ingrand, he is one of the most famous and talented glassmakers of the period. His work in France and Morocco has yet to be studied and discovered.