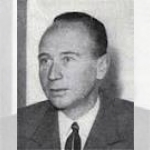 Engineer by training, he finally decided to shift towards applied arts after the International Exhibition of Decorative Arts of 1925, and more specifically to the furniture.

His pieces are very classical, with massive shapes as well as very straight lignes, and are covered with unified veneer. He uses fashionable wood essences as Macassar ebony, walnut or sycamore, of whose he highlights the wood grains. Sometimes, he embellishes them with metal marquetry, parchment or shagreen, in line continuity with the sets of Jacques-Emile Ruhlmann.

In 1934, he delivered after the Suite called ‘Dieppe’ for the liner Normandie and in August 1937, Jean Zay, Minister of Public Instruction and Fine Arts, commissioned the construction of his cabinet at the Rochechouart private hotel in Paris.

After the war, Jean Pascaud was interested in the serie furniture, but his preference finally remained to the luxury furniture and the noble wood species. Thus, it was a traditionalist for who metal chromed tubes and glass panels of Dufet or Dupré-Lafon were not his taste.