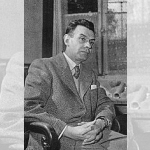 Gilbert Poillerat, decorator and blacksmith, was born on the border between Beauce and Sologne. After the Boulle school, from which he graduated in 1921, and eight years spent at Brandt as a young man, he was ranked first among ironworkers. However, it was only after devoting himself to chiselling and painting that he developed a passion for this art. Ask him which style he prefers in ornamental ironwork, and he will answer: "The 17th century, because that was the period that brought the most beautiful works of ironwork to life. A simple balcony, a banister of staircase bore the mark of the elegance and the French spirit".

The arabesques of its balustrades made it known to the public. Its high bronze leaves, decorated with robust and graceful motifs, turn without jerking. One spends hours looking at his precise drawings, his daily research. The staircase, the door, the lamp post, the table, Gilbert Poillerat enlightens them by deciding on their shapes and volumes, because he adds to his art of decorating the technical knowledge of the forge. It is indeed essential that the plans are dimensioned to the millimetre, giving all the details of the construction of each work. Perspective and thickness are indicated by figures to which ironworkers must conform.

The bars and sections arrive from the rolling mills at the factory, this vibrant city of hammering where men methodically bend, bend, drill, turn and weld with the help of powerful machines powered by electricity. There, sawing machines slice enormous iron bars with the same ease as if they were a common plank. It is in this field that, since 1918, explains Gilbert Poillerat, the tooling of the mechanical industries has allowed daring achievements, especially in the ironwork of buildings, because a building constructed with sophisticated means rises in a few months and must keep up with the accelerated pace of the building site.

It seems that these ornaments remain the prerogative of private mansions, artists' studios, country houses that are looking for a finery, a style in refinement. This means that very often the artist is dependent on the architect who orders the decoration of the building he builds. Let us only follow today the Master Ironworker. His drawings prove to us how far his ever-awakening conception can go. The medals, in which Gilbert Poillerat excels, with all the delicate art of chiselling show another part of the diversity of his talent, without forgetting the painting and drawings of Touraine landscapes which, in the precision of detail, of the line, make us close the cycle at its culminating point: Ironwork.