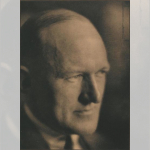 René Prou moved to Paris from the Bernard-Palissy school in 1908. He then became artistic director of the Gouffé firm, which allowed him to gain experience.

Very quickly, he received prestigious commissions such as for the boardroom of the Comptoir National d'Escompte de Paris or the residence of the ambassador of Paraguay.

In 1919 he exhibited at the Salon d'Automne, which earned him several commissions for the liners Paris, Roussillon, Cuba and De Grasse. The Exhibition of Industrial and Modern Decorative Arts offered him the opportunity to show his knowledge as an architect and decorator.

From 1928 to 1932, he became just after Paul Follot, artistic director of Pomone. This period marks his passage from wood to metal while striving to lighten the forms of the Art Deco of the early twenties.

From the end of the thirties until his death, he taught at the Ecole nationale supérieure des arts décoratifs.