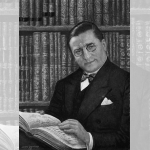 Armand-Albert Rateau was a French drawer, interior designer, decorator and meublier. Hailing from Paris, he was trained at l'École Boulle, and started his career with the reknowned decorator Georges Hoentschel who helped him suffuse his wood-carving talents.

Aged twenty-three, Rateau became the artistic director of d'Alavoine et Compagnie, one of the greatest decorative entreprise of the time. In 1919, he set up his own business in his private mansion. This place soon transformed in a true laboratory for his easthetic choices which he progressively outlined his creative style. With assistance of Jeanne Lanvin and for her appartment, rue Barbet-de-Jouy, he furnished her interior. Some of the pieces are nowadays kept at the Musée des Arts décoratifs in Paris.